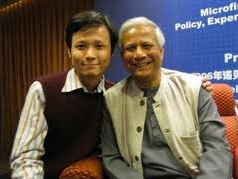 Global Advances Group executive Zheng Wei had the honorable opportunity to meet Nobel Laureate Muhammad Yunus during the Celebrity Forum at the International Poverty Reduction Center (IPRCC) in Beijing, China. The event was hosted by the State Council Leading Group for China’s Office of Poverty Alleviation and Development.

Yunus shared his story about how he began loaning his own pocket money to groups of women in his home country of Bangladesh, and how he successfully grew his operation into to the world-renowned Grameen Bank today. Using his own credit he assumed the role of a guarantor for these groups of women to borrow money from local banks for their entrepreneurial activities. Yunus discovered the tremendous impact that small loans could make on poor communities and as the loans became larger and larger, banks refused to lend any more. Consequently, Yunus had the idea of establishing a totally new type of bank to specifically server the poor and help them escape the poverty trap. He succeeded enormously by reaching over 8 million poor people. Today the Grameen Bank not only offers microfinance solutions, but also offers pension fund services, loan insurance, and an education fund to meet the poor’s needs. Conventional banks are owned by the rich; however, the Grameen Bank is founded by the poor, works for the poor, and is also owned by the poor. Presently the Bank has over 7.7 million clients (borrowers), and most of the borrowers are also shareholders, with yearly dividends ranging from 20% to 50%.

Referring to the state of Social Entrepreneurship in China, he advised young people in China:

“When you wake up every day, take a look at yourself through the mirror, and say to yourself: ‘You are a job-giver, not a job-seeker!’ “

He noted that this specific mindset is what differentiates entrepreneurs from non-entrepreneurs. Yunus encourages youth aspiring to become entrepreneurs to think like a job-giver, not a job-seeker. Entrepreneurs think proactively and actively get involved in creating things, both for themselves and others; when more people choose to create rather than wait passively for things to happen the entire society benefits.

🦠 2020 really sucked for everyone so: 🎁 Giving away another ~$3,000 🍎 MacBook Pro 16" to a random person who retweets this tweet to cheer every1 up 👩‍🎨 Please make something creative with it (you have to follow for winner DM) Proof of last time: twitter.com/JSXRDX/status/…

The monopolies of knowledge. on.theatln.tc/4LfNx2i

The Global Advances Group is committed to allocating resources for business endeavors that demonstrate both profitability and a positive social impact. We acknowledge that purpose and profit are not zero-sum – they are mutually reinforcing and require the determination to take necessary risks. Our strategy consists of creating revenue streams to support projects that provide a positive social impact and ultimately benefit the whole of humanity.
→ Read More